If you know the meaning of this saying, you’ll know where I’m going with this when it comes to preparing both vacant & occupied houses going on the market.

Sellers, don’t list your house until it has been properly prepared.  Don’t be so anxious to sell that you do things backwards!

The best time to stage your house

This happens so many times!  I get a call from potential sellers wanting a quote to stage their vacant house before they put it on the market.  Now you can’t stage a vacant house of any size for $500.  When people realize it could cost anywhere from $1500-10,000, they will sometimes put it on the market without staging it to see what happens.  Maybe it will sell without staging and then they will save all that money for staging!  If it doesn’t sell in a couple of months, they will stage it.

Occupied houses also need to be properly prepared for a faster and more profitable sale.   I will often do a consultation ($200 for average size house) for an occupied home and give detailed instructions of what they need to do to increase the sellability of their house.  It could be instructions on which areas to paint.  I also give the paint colors that would work best for buyers.   It could be updating light fixtures, appliances, flooring , etc.  Or it may just be the arrangement of furniture for optimum traffic flow, de-cluttering and de-personalization.  Advice could include instructions for correct placement of art or advice about window treatments.  It may include which pieces of furniture to remove or what pieces need to be added.  Every house is different.

And sometimes the same thing happens with occupied houses.  The sellers will often put it on the market first to see if they can sell it without doing all the work or spending all the needed money.  But the most interested people will see it first and it will be un-staged.  So the seller could lose a potential sale.

And if they decide to stage it after a couple of months, the most interested people will not see it staged.  Also, the listing is becoming stale and the momentum is gone.

And whether vacant or occupied, the first impression for most buyers today is from the online photos.  Buyers today eliminate houses based simply on the photos, especially when there are so many houses to choose from.

So, the moral of the story is that no matter how you look at it, staging your house BEFORE it hits the market is more profitable for the seller. 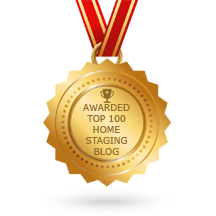 Cathy, thanks for your help. Just for your information, we had competitive offers and sold the property the first weekend for full price. We will touch base on our next listing. Home staging works.